Abstract
The inference of causality from observational evidence may be problematic, as observational studies frequently include confounding factors or reverse causation for the identification of associations between exposure and outcome. Thus, in observational studies, the association between a risk factor and a disease of interest may not be causal. A randomized controlled trial (RCT) is considered the gold standard, because it has the best possibility to establish a relationship between a risk factor and an outcome. However, RCTs cannot always be performed, because they can be costly, impractical, or even unethical. One of the alternatives is to perform Mendelian randomization (MR) experiments that are similar to RCTs in terms of study design. The MR technique uses genetic variants related to modifiable traits/exposures as tools to detect causal associations with outcomes. MR can provide more credible estimates of the causal effect of a risk factor on an outcome than those obtained in observational studies by overcoming the limitations of observational studies. Therefore, MR can make a substantial contribution to our understanding of complex disease etiology. MR approaches are increasingly being used to evaluate the causality of associations with risk factors, because well-performed MR studies can be a powerful method for exploring causality in complex diseases. However, there are some limitations in MR analyses, and an awareness of these limitations is essential to interpret the results. The validity of results from MR studies depends on three assumptions that should be carefully checked and interpreted in the context of prior biological information.
Keywords: Mendelian randomization, Causality, Review

Understanding the causal role of risk factors to diseases is important to uncover the pathogenesis of disease and plan treatment strategy. Concluding causality from observational data, however, is troublesome, as observational studies conducted to identify correlations between modifiable exposures and disease outcomes often include confounding factors or reverse causation, which lead to misunderstood and biased findings [1]. Consequently, in observational studies, a link between the modifiable risk factor or exposure and outcome cannot be causal. A randomized controlled trial (RCT) is widely recognized as the gold standard, which has the best possibility to establish a relationship between a risk factor and an outcome. Associations found in observational studies, in many cases, do not reveal any relationship in RCTs [2,3]. In addition, RCTs cannot be done often, because they can be costly, impractical, or even unethical [4].

To deal with the confounders in observational studies and identify causal relationships, an alternative approach is needed. One of the alternative approaches is to perform Mendelian randomization (MR) experiments that are based on Mendel’s independent assortment rule: each trait is inherited to the next generation independently of other traits. In MR, the random segregation of alleles (genes) separates them independently into exposed and controlled groups, which results in unmeasured confounding factors that are also distributed equally between two groups [5]. Thus, the MR experiment resembles a RCT [6] (Figure 1). The MR approach uses genetic variants linked to modifiable traits/exposures to identify causal associations with disease. The increasing size and scope of genome-wide association studies (GWASs) to identify risk factors (exposures) and diseases (outcomes) has led to increased use of MR studies. However, MR studies depend on three assumptions, and it is important to assess the plausibility of such assumptions to validate the results from MR studies.

IV assumption 1: The genetic variant must be related to the exposure. Typically, genome-wide-significant single nucleotide polymorphisms (SNPs) (p<5×10−8) are used as instruments in MR studies. Moreover, combining the results of many SNPs is used as an instrument in MR studies, because the use of poor instruments based on a single SNPs will skew MR estimates [6].

IV assumption 3: The genetic variant affects the outcome only through the risk factor. This is commonly called the “no pleiotropy” rule. If a SNP is correlated with several traits, irrespective of the exposure of interest, the third IV assumption may be infringed. While it is not possible to prove that this assumption is considered in an MR study, different extensions of the MR design such as MR-Egger or a weighted median test can be used to detect the presence of pleiotropy and/or estimate the causal effect of exposure, even in the presence of assumption 2 and/or 3 violations [6].

MR can estimate causal effects where exposure and outcome data from different samples exist. Two-sample MR uses two different study samples for the risk factor and the outcome to estimate the causal effects of the risk factor on the outcome [8]. It is helpful when it is difficult to measure both the risk factor and outcome at the same time, as two-sample MR offers the chance to incorporate data from different sources [8]. When the genotype-exposure and genotype-outcome data comes from different sources, meta-analysis can estimate the combined effects by using two-sample MR to estimate the size of the exposure (risk factor)–outcome (disease) association [9]. Individually, single genetic variants usually explain only very little of the variation in a phenotype, which can lead to “weak instruments,” in particular in modest sample sizes [10]. To overcome this, multiple genetic variants are used that collectively explain more of the risk factor variation because they have a greater statistical power than a single variant [11].

The Wald ratio is the easiest way to calculate the causative effect of an exposure on an outcome when a single genetic variant is available. This can be seen as the change in the outcome of a unit change in exposure [9].

3) Accounting for deviations in MR assumptions

The effect of a genetic variant on several biological routes is demonstrated by pleiotropic effects that may affect the outcome through another pathway, known as horizontal pleiotropy. Horizontal pleiotropy contradicts the IV principles, because the effect of the genetic variant tested is not solely owing to the risk factor, which is troublesome for MR studies. Many methods have been established for defining and correcting breaches of assumptions, when some of the variants selected are invalid instruments.

If up to 50% of the genetic variants are invalid, then a causal effect may be estimated as the median of the weighted ratio estimates using the reciprocal of the variance of the ratio estimate as weights [14]. The InSIDE assumption is not needed and violations of the second and third IV assumptions are permitted [14]. In contrast to the MR-Egger process, the weighted median estimator has the benefit of preserving greater precision in the estimates.

Violations of the IV assumptions lead to MR limitations [15]. Owing to the limited availability of population-specific information on genetic associations, genetic instruments tend to show poor statistical power. Since genetic polymorphisms usually only explain a small fraction of the total variance in traits, it is not advisable to rely on a simple IV study alone for a causal inference [16]. Since a certain genetic variant typically explains only a small proportion of the risk factor variance, multiple variants are often combined to increase statistical strength. MR studies, therefore, need large sample sizes to ensure adequate statistical power.

A genetic variant or multiple genetic variants may associate with other exposures, a phenomenon known as “pleiotropy” [17]. The use of a genetic variant with pleiotropy will contribute to a misrepresentation of MR. The definition of MR is based on three principal assumptions. The MR analysis may be weakened by deviations in the assumptions underlying the IV. The first IV presumption can be directly assessed by checking whether the genetic variant is associated with the risk factor (exposure) [18]. However, the second and third IV assumptions cannot be proven empirically and require investigator judgment and the performance of several sensitivity analyses [18].

Other limitations of MR analysis include the lack of appropriate genetic variants, existence of linkage disequilibrium, genetic heterogeneity, population stratification, and developmental canalization or lack of an understanding of the confounding factors [6].

Example of an MR study: Causal relationship between years of education and rheumatoid arthritis (RA)

Table 1 . The MR estimates from each method of assessing the causal effect of years of education on the risk of RA. 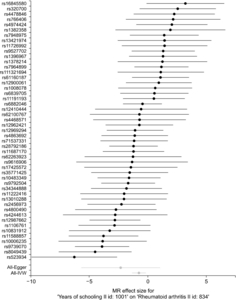 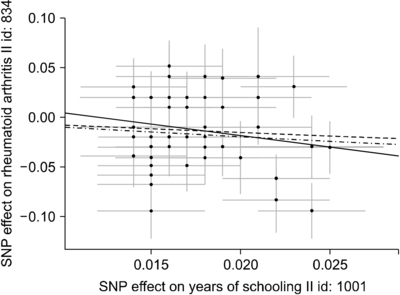 MR studies are similar to RCTs, when the three main IV assumptions are met. Although MR does not serve as a substitute for RCT, it is useful in situations where an RCT is unethical or unavailable. Properly applied, MR is less confusing than the traditional study by using observational data. MR can provide more accurate estimates of the causal effect of a risk factor on an outcome than those obtained from observational studies by overcoming the limitations. MR approaches are increasingly being used to evaluate the causality of associations between risk factors and disease. MR could contribute enormously to our understanding of complex disease etiological architecture. The validity of results from MR studies relies on the correctness of several assumptions, which should be closely checked and interpreted in the context of prior biological knowledge. There may be a number of limitations in MR analyses, and awareness of these is essential for interpreting their results. If properly applied, MR can be majorly successful in uncovering and strengthening the causality between modifiable exposures and a wide range of complex disease-related outcomes. Well-conducted MR studies can be a valuable method for exploring the causal relationships in complex diseases.