Inflammatory involvement of the anterior chest wall (ACW) is a well-known clinical feature of spondyloarthritis (SpA), possibly worsening the overall quality of life of these patients [1]. The ACW lesions might occur in the sternoclavicular joint (SClJ), manubriosternal joint (MSJ), and costosternal joint (CSJ). Recent large sample-size studies reported ACW involvement, as identified by clinical examination, to be frequent, occurring in 26%∼45% of the patients [2-4]. However, given the complexity of this anatomic region, clinical examinations alone might have limited ability to accurately assess the presence of such lesions [5]. In contrast, inflammation-like changes on the ACW, particularly in the MSJ, could also be observed in healthy individuals [6].

Magnetic resonance imaging (MRI) of the sacroiliac joint and spine is increasingly used to diagnose and classify axial SpA (axSpA). It is also used for evaluating treatment effectiveness owing to its ability to detect inflammation early and reveal structural changes [7]. However, validated or preferred imaging modalities to evaluate ACW involvement have not been established yet [8]. Indeed, evaluating the presence of ACW lesions tends to be overlooked in clinical practice, and imaging assessment for this region is not routinely considered.

To date, no study has investigated the imaging findings of ACW lesions and clinical characteristics of ACW involvement in Korean SpA patients. Thus, we describe a case series of ACW involvement in which spinal MRI-detected MSJ lesions in patients with ankylosing spondylitis (AS) and non-radiographic axSpA (nr-axSpA). Additionally, a review of the literature on such MRI findings was performed.

We retrospectively reviewed the radiology database for reports of MRI-detected ACW lesions in patients with rheumatic diseases at our institution, covering the period between January 2015 and May 2020, and using the search term “manubriosternal.” Most patients underwent spinal MRI, which offers sagittal but not coronal images of the ACW. This limits its ability to perform accurate imaging assessment of SClJ and CSJ. Thus, abnormal MRI findings in the ACW region focused on the MSJ.

Twenty patients (17 with AS and three with nr-axSpA) with abnormal findings of MSJ on MRI were included in this study. Demographic and clinical data of the patients are shown in Table 1. The patients had a median age of 37 years (range, 21∼69 years). Thirteen patients (65.0%) were men. HLA-B27-positive was noted in 84.2% of the available data. The median symptom duration was 7.5 years (0.5∼26.0 years). Nine of the 20 patients had a history of ACW pain, and four had ACW pain at the time of MRI examination. ACW pain onset time was highly variable among the patients, ranging from five years before diagnosis to 18 years after disease diagnosis. One patient reported ACW pain as the initial symptom of the disease.

The MRI findings of the MSJ lesions with their patterns and frequencies are as follows: joint erosion (65.0%) was the most prevalent finding, followed by bone marrow edema (BME) (30.0%), periarticular fat deposition (20.0%), and joint ankylosis (15.0%). Active inflammatory lesions and chronic structural damage were simultaneously observed in four patients. Figures 1∼3 show examples of MRI-detected MSJ lesions. Sagittal MR images of BME, joint erosion, periarticular fat deposition, and ankylosis of the MSJ in patients with and without a history of ACW pain are presented. 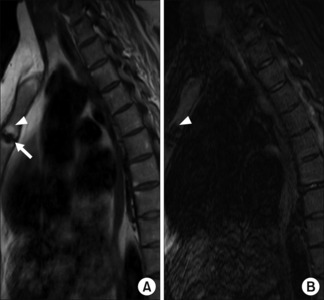 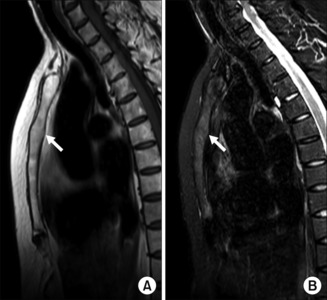 We searched PubMed and EMBASE from their inception until 26 July 2020. The terms used in MeSH and free-text searches were categorized into the following three concepts: “spondyloarthritis,” “anterior chest wall,” and “magnetic resonance imaging.” The terms corresponding to each concept were searched individually and then integrated with the Boolean term “AND”. Four studies were finally included in our review [2,9-11], with their details summarized in Table 2.

The ACW involvement in AS patients identified by MRI was first reported in the 1997 study, but MRI was performed in only three of the 50 subjects [9]. In 2012, Weber et al. [2] reported that MRI-detected ACW involvement was present in 72 (59.0%) of 122 SpA patients, with MSJ being most frequently affected, followed by SClJ and CSJ. In the MRI findings of the entire ACW region, including MSJ, SClJ, and CSJ, BME was observed in 44.3% of the patients, erosion in 34.4%, and fat infiltration in 27.0%. Ankylosis of the MSJ was observed in 11.5% of patients. When comparing AS and nr-axSpA patients, all MRI lesion types were more frequently observed in AS patients. The ACW lesion distribution and the lesion type frequencies were shown to be similar in both groups.

Data of MRI findings from patients whose ACW involvement had already been confirmed by clinical assessment were available in two studies [10,11]. In a prospective cross-sectional study of 40 patients with early stage of the disease accompanied by ACW pain or tenderness noted on clinical examination, 25 (62.5%) had abnormal MRI findings, showing active inflammation and advanced damage, while the remaining 15 patients (37.5%) had normal MRI findings [11]. Similar results were found in the study by Guglielmi et al. [10], although the sample size was smaller.

Imaging assessment of the ACW region in SpA patients, in whom ACW involvement is known to be common, is relatively overshadowed by the diagnostic value of the sacroiliac joints imaging. However, the role of MRI in ACW evaluation, and its ability to detect acute inflammatory and chronic structural changes as in the sacroiliac joints, were confirmed through our literature review. We also found that the pattern and frequency of lesions detected by spinal MRI correspond with previous reports on BME, erosion, fat deposition, and ankylosis of the MSJ. To the best of our knowledge, this is the first description of MRI findings of inflammatory ACW involvement in Korean SpA patients.

The clinical involvement of the ACW has been reported in 35%∼50% of established SpA patients [3,9]. However, it also occurs in the early stage of the disease [11], and could be manifested as an initial disease symptom, ahead of inflammatory back pain. The ACW involvement could thus be interpreted as a diagnostic feature for SpA [4]. Similar to previous reports, ACW pain onset time was highly variable among our patients, including cases in which ACW pain occurred before the disease diagnosis and initial ACW pain symptoms appeared 18 years after the disease onset.

The prevalence of ACW involvement based on imaging assessment varies between imaging methods such as bone scintigraphy, computed tomography, ultrasonography (US), and MRI. It ranges from 35.5% to 67.2%, with MSJ being the most commonly affected joint [2,9,12,13]. The detection variability between the imaging modalities might be attributable to the differences in their lesion detection sensitivity and specificity, in addition to study population heterogeneity. Among the imaging tools, MRI can reveal the type and severity of the lesions. Whole-body MRI, which allows visualization of the entire body, including structures of ACW, is the primary modality used in recent studies [2,14]. Nevertheless, our cases show the usefulness of sagittal spinal MRI when assessing ACW involvement. Therefore, it would be helpful to include the ACW in the field of view when spinal MRI examination is planned, at least when dedicated MRI for the ACW is not routinely considered.

The lesion type frequencies in our patients were somewhat different from those identified in the literature review. Erosion was observed as the most frequent lesion type in our cases, while other studies reported BME to be the most common finding [2]. Because ACW involvement might be associated with disease duration and a higher disease activity [12,13], the frequency of each lesion type would vary depending on the baseline characteristics of the patients.

Several studies found no correlation between MRI-detected ACW lesions and either the physician assessment or patient self-assessment [2,11,14,15]. More inflammatory lesions were found by MRI than through clinical examination in some studies [2], while other studies showed the opposite result [11,15]. Similarly, only about half of our patients reported having experienced or being currently accompanied by ACW pain. Weber et al. [2] suggested subclinical ACW inflammation as a possible explanation for the poor agreement between the two assessment methods. A recent study based on US findings, where 17.5% of patients had US abnormality without clinical symptoms, could further support the probability of subclinical joints and entheses inflammation in the ACW region [12]. Therefore, identifying the presence of ACW lesions which can be detected by spinal MRI would be helpful for more comprehensive assessment of disease extent.

The spinal MRI findings in our case series showed acute inflammation and chronic structural damage of the ACW. These changes involved BME, erosions, fat deposition, and ankylosis, in line with lesions identified through a literature review. Further studies are needed to evaluate the diagnostic value of these findings and the association between MRI findings and clinical assessments.