Abstract
Systemic lupus erythematosus (SLE) may occur in any organ. In patients with SLE, myocarditis is extremely rare and potentially life-threatening. Herein, we report on a patient with lupus myocarditis, diagnosed by myocardial biopsy, immunologic tests, and clinical manifestations. Our findings suggest that securing time for diagnosis via extracorporeal membrane oxygenation and other intensive care is helpful for obtaining a good prognosis.
Keywords: Extracorporeal membrane oxygenation, Myocarditis, Systemic lupus erythematosus

The cardiac involvement of systemic lupus erythematosus (SLE) with refractory shock is rare and life-threatening [1,2]. Lupus myocarditis (LM) is clinically found in 3%∼9% of SLE patients [3]. Herein, we report a challenging diagnosis, which was obtained by myocardial biopsy, and the treatment of a patient with SLE who presented with cardiogenic shock.

A 62-year-old female without any known disease was transferred to the emergency department due to fever for 10 days and persistent dyspnea; she had no medication history until symptoms developed and was admitted due to shortness of breath with right-sided pleural effusion 17 days previously (Figure 1A). Thoracentesis performed during the previous hospitalization revealed a lymphocyte-dominant exudate (red blood cell [RBC] 2,000/μL, white blood cell [WBC] 1,440/μL, lymphocyte 66%, protein 5.3 g/dL, albumin 2.6 g/dL [serum albumin 3.6 g/dL], lactate dehydrogenase [LDH] 152 IU/L [serum LDH 209 IU/L], and adenosine deaminase [ADA] of 43 IU/L). Due to the increased lymphocytes and ADA, the patient was suspected to have tuberculous pleurisy and the following medications were administered: anti-tubercular drugs (isoniazid, rifampin, ethambutol, and pyrazinamide) and cefepime for 10 days. However, she complained of dyspnea and fever when she visited our hospital. The patient was alert, and the peripheral oxygen saturation was 99% with nasal oxygen at 6 L/min. Her blood pressure was 100/60 mmHg, pulse was 99 beats/min, and body temperature was 38.2°C. Laboratory results at the emergency department are shown in Table 1; increased WBC, bicytopenia (RBC and platelet), elevated C-reactive protein, and high sensitive troponin I. Chest computed tomography showed right dominant pleural effusion,and mild pericardial effusion.

Table 1 . Laboratory results of the case. 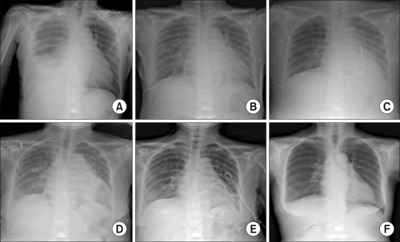 Table 1 summarizes the laboratory results conducted to investigate the cause of myocarditis. Coronary angiography and RV endomyocardial biopsy (EMB) revealed no significant coronary artery occlusion. The biopsy revealed scattered lymphocytes with a loss of myocardium, consistent with myocarditis (Figure 3A and 3B); findings suggestive of infiltrative cardiomyopathy were absent.

Figure 3. Pathologic findings. (A) Scattered lymphocytes and loss of myocardium replaced by progressive fibrosis (arrows) (H&E stain, ×11); (B) Immuno-histochemistry of CD3. The diffusely scattered lymphocytes have been stained dominantly with CD3 (×11).

Since the patient’s condition was critical, methylprednisolone (1 mg/kg, 70 mg) was empirically administered for 2 days after EMB on the 3rd to 4th day of hospitalization, while waiting for the biopsy results. The results of the biopsy suggested the possibility of idiopathic myocarditis to be higher than that of amyloidosis or sarcoidosis; therefore, steroid therapy was discontinued after 2 days. Mechanical ventilation and ECMO were discontinued on the 7th and 9th days of hospitalization, respectively. On the 12th day of admission, she complained of chest discomfort accompanied by atrial fibrillation with a rapid ventricular rate. TTE was performed, and increased pericardial effusion was observed. Pericardiocentesis was performed, and 500 mL was drained. Since previous culture and microbiologic tests were negative, a non-infectious origin was considered.

We consulted the rheumatologist and performed additional tests. Profiles of autoantibodies are shown in Table 1; positive for anti-nuclear antibody (ANA), anti-double-stranded DNA antibody (anti-dsDNA antibody), and anti-Sjögren’s-syndrome-related antigen A antibodies (anti-Ro52, anti-Ro60) and decreased levels of C3 and CH50. She was diagnosed with SLE on the 12th day of hospitalization; the patient fulfilled four of the 1997 American College of Rheumatology criteria (serositis [pleuritis], hematologic disorder, ANA positivity, and immunologic disorder) and seven of the 2012 Systemic Lupus International Collaborating Clinic criteria (serositis, leukopenia, thrombocytopenia, abnormal findings of ANA, anti-dsDNA, Anti-Sm, and low complement). Methylprednisolone (1 mg/kg, 70 mg) was restarted, and the patient’s condition improved gradually; she was transferred to the general ward on the 23rd day of hospitalization.

Echocardiography on the 14th day of hospitalization demonstrated normalization of the LV wall thickness and contractility. However, it revealed signs of mild rheumatic stenosis (Figure 2D∼2F). Cardiac magnetic resonance imaging was performed on the 37th day of hospitalization; myocardial inflammation and pericardial effusion had disappeared. However, diffuse late gadolinium enhancement of the entire pericardium suggested remnant pericarditis. The patient was discharged with methylprednisolone (40 mg/day) on the 49th day of hospitalization; the pleural effusion and cardiomegaly improved compared to previous chest radiographs (Figure 1B∼1F). During follow-up, the dose of methylprednisolone was reduced to 4 mg over 2 months with azathioprine (25 mg/day) and hydroxychloroquine (200 mg/day). She has been doing well for the past 6 months without relapse of SLE (Figure 4) and has provided informed consent for publication of this report. 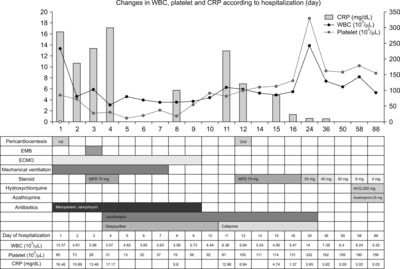 The study was approved by the Institutional Review Board of Pusan National University Yangsan Hospital (IRB No. 05-2021-001).

This case demonstrated fulminant myopericarditis caused by SLE. In this case, SLE was suspected only after clinical deterioration following discontinuation of steroid. Although proper laboratory tests were not performed at the beginning of hospitalization, the start of steroid therapy immediately after biopsy was considered to have helped improve the patient's condition. Clinical suspicion of autoimmune diseases, including SLE, should be considered, and early evaluation may improve prognosis without a relapse.

Cardiac involvement in SLE may involve the pericardium, myocardium, endocardium, heart valves, and coronary or pulmonary arteries [4]. Pericarditis is one of the most characteristic disease manifestation in SLE [5]. Nonetheless, cardiac tamponade is uncommon (∼2%) [5]. LM reportedly occurs in 9% of SLE patients [6]. There are a few reports on clinically apparent fulminant LM [7]; those on ECMO-supported cases are even rarer, and the prognosis in LM is dismal. A multi-center study in 2017 reported 29 cases of LM; three patients required ECMO support, and two died [6].

Most often, myocarditis results from viral infections; less commonly, specific forms of myocarditis may result from other pathogens, toxic or hypersensitivity-inducing drugs, giant-cell myocarditis, or sarcoidosis. EMB is the gold standard for diagnosing myocarditis [8]; however, it is rarely performed in the clinic. Most myocardial histopathology reports on SLE comprise postmortem data [8]; such reports reveal mononuclear cell infiltrates, perivascular inflammation or arteriopathy, and necrosis of the cardiomyocytes [7]. Our patient was relatively older and had a thickened myocardium. Thus, we expected the EMB to reveal signs of infiltrative cardiomyopathy. However, the pathology results indicated myocardial inflammation, necessitating the administration of anti-inflammatory therapy. EMB is not always required to diagnose LM. If the immunological tests and clinical findings strongly suggest SLE, EMB may not have been considered. However, it was helpful in excluding other diagnoses, and in the case of suspected myocarditis with cardiogenic shock, some studies recommended EMB to confirm myocarditis [9].

The timing of appropriate steroid administration in myocarditis is unclear. Steroid administration is not recommended in myocarditis caused by viral infection [10]. However, it is often difficult to rapidly diagnose the etiologies of myocarditis [10]. Thus, some clinicians initiate steroids with or without intravenous immunoglobulin when patients clinically decompensate despite advanced cardiopulmonary support in an effort to treat cryptogenic primary immune processes [10,11]. In this case, steroid was empirically administered just after EMB until pathology results were confirmed.

The treatment of LM has not been standardized and is based on clinical experience. Acute LM requires urgent clinical attention [4]. Most treatment modalities include high-dose corticosteroid administration as first-line therapy [6]. Some studies suggest high-dose intravenous therapy (e.g., methylprednisolone pulses of 1,000 mg/day), followed by high doses of an oral preparation (e.g., prednisolone, 1 mg/kg/day) for 1 to 2 weeks [4]. Moreover, immunosuppressive drugs, such as cyclophosphamide, mycophenolate mofetil, azathioprine, or cyclosporine, have also been used to manage LM [6]. Optimization of the treatment of underlying SLE and coexisting conditions, such as coronary artery disease, was suggested [4]. In our case, after the acute phase of LM, the patient was administered oral methylprednisolone, azathioprine, and hydroxychloroquine without worsening SLE or recurrence of myocarditis.

VA-ECMO and pericardiocentesis could help treat fulminant myocarditis with cardiac tamponade due to SLE. It is important to consider rapid evaluation of immune-mediated myocarditis. Early administration of steroid therapy may help improve myopericarditis caused by SLE.