Cryoglobulins (CGs) are immune complexes that precipitate from serum at temperatures below 37°C and redissolve upon rewarming. There are three different subgroups of CGs based on their composition. Type I shows an isolated monoclonal immunoglobulin; type II includes polyclonal IgGs and monoclonal IgM with rheumatoid factor (RF) activity; type III includes polyclonal IgGs and polyclonal IgMs with RF activity [1]. Type II and III CGs also refer to mixed cryoglobulins. Cryoglobulins are not pathogenic in most cases but may lead to small-to-medium vessel vasculitis called cryoglobulinemic vasculitis (CV) in 2%∼50% of the cases [2].

Type I CV is commonly found in patients with lymphoproliferative disorders and represents the symptoms secondary to vascular occlusion including Raynaud’s phenomenon, ischemic ulcers, and gangrene. When the cryocrit is high, symptoms of hyperviscosity may occur such as blurred vision, headache, and other symptoms related to encephalopathy [3]. Mixed CV is associated with infectious disease, notably chronic hepatitis C infection, and autoimmune diseases such as Sjögren’s syndrome and systemic lupus erythematosus [2]. In addition, there have been several case reports of overlap syndrome of systemic sclerosis (SSc) and cryoglobulinemic vasculitis [4]. In mixed CV, nonspecific symptoms such as myalgia, fatigue, and arthralgia are common, and cutaneous vasculitis including purpura and peripheral nerve involvement is more frequent [5]. However, central nervous system (CNS) involvement was only seen in 0%∼3% of the patients in several large case series [3,6].

We report a rare case of CNS involvement in cryoglobulinemic vasculitis in a patient with limited cutaneous SSc.

A 41-year-old female patient visited our hospital due to the sudden onset of visual disturbances. She had been diagnosed with limited cutaneous SSc three years earlier when she presented with manifestations including skin sclerosis of the finger, hand, forearm, and face. She had a fish-mouth appearance, Raynaud’s phenomenon, digital ulcer, multiple telangiectasias on the face, reflux esophagitis, and interstitial lung disease. She had diffusely reduced nail-fold capillaries with bulging and micro-hemorrhages. A skin biopsy of the forearm showed increased dermal collagen deposition with superficial perivascular lymphocytic infiltration. The fluorescent antinuclear antibody test was positive (>1:320, nucleolar pattern). And anti-centromere antibody and anti-Scl-70 antibody test were negative. She fulfilled the American College of Rheumatology/European League Against Rheumatism 2013 criteria for the classification of SSc. She had been treated with bosentan and aspirin for Raynaud’s phenomenon and the digital ulcer. There was no evidence of progression of interstitial lung disease on the two-year follow-up chest computerized tomography and pulmonary function test.

Seven days before visiting our hospital, the patient was admitted to another hospital due to a fever of over 38°C and a headache. The cerebrospinal fluid (CSF) analysis showed protein 161.6 mg/dL, glucose 39 mg/dL, red blood cells (RBCs) 0/mm3, and white blood cells (WBCs) 459/mm3 (88% polymorphonuclear cells). The serum C-reactive protein (CRP) and erythrocyte sedimentation rate (ESR) were 10.6 mg/dL and 82 mm/h, respectively. Magnetic resonance imaging (MRI) of the brain showed several T2 hyperintense lesions on the frontal, left parietal, and left occipital lobes and prominent leptomeningeal enhancement. The initial assessment was bacterial meningitis with early encephalitis, and empirical antibiotic therapy (ceftriaxone and vancomycin) was started. However, visual disturbances developed after four days of treatment with antibiotics. The follow-up MRI of the brain showed increased size and number of multifocal T2 hyperintense lesions along the bilateral cerebral hemisphere and midbrain including a 4.5-cm-sized lesion on the right posterior lobe (Figure 1). The results of CSF Gram staining and culture, PCR test for herpes simplex virus and enteroviruses, cryptococcus antigen test, and fungal culture were all negative. She was referred to our hospital for further evaluation.

The patient had visual impairment to the extent of counting the number of fingers, and also complained of headache, dizziness, fever, myalgia, polyarthralgia, and a tingling sensation in both feet. Her blood pressure (BP) was 192/103 mmHg, heart rate was 48/min, and body temperature was 37.3°C. The electrocardiogram revealed sinus bradycardia with normal QT interval. The neurological examination showed a drowsy mental state and neck stiffness. The sensory examination revealed paresthesia in both feet and the muscle strength examination showed bilateral symmetric weakness (4/5) of the upper and lower extremities. The deep tendon reflex was positive in the biceps tendon, negative in the patella tendon, and the Babinski sign was positive bilaterally. There was a skin ulcer (4×5 cm) on the right lateral malleolar area and no evidence of synovitis in the peripheral joints. The WBC count was 14,090/mm3, the CRP was 3.09 mg/dL, and the ESR was 56 mm/h. Antibiotic therapy was continued and intravenous acyclovir, nicardipine, and mannitol, and dexamethasone treatment for brain edema were started. Her BP stabilized within six hours. However, visual impairment deteriorated, and left-sided weakness and Raynaud’s phenomenon developed in fingers.

The emergency cerebral angiography showed diffuse stenosis and a beaded pattern of both the anterior and middle cerebral arteries and their branches, and diffuse luminal narrowing with dysplastic changes in the right distal vertebral artery and basilar artery trunk (Figure 2). The impression was cerebral angiitis. Therefore, methylprednisolone 1,000 mg pulse therapy was started and continued for three days. On the second day of corticosteroid administration, the patient displayed a gradual improvement in her mental status, and fever resolved. Three days later, she was able to read the text on a nameplate, and the motor function markedly improved. Four days after the end of the corticosteroid pulse treatment, the level of ESR and CRP were 15 mm/h and 0.29 mg/dL, respectively. The follow up angiography was not performed. But, ten days after the end of the corticosteroid pulse treatment, CSF analysis showed protein 40 mg/dL, RBCs 0/mm3, and WBCs 3/mm3. The laboratory results showed positive cryoglobulins, markedly reduced C4 levels (<1 mg/dL), and positive rheumatoid factor (15 IU/mL). Anti-hepatitis C virus antibody and hepatitis B surface antigen were negative. The results of anti-neutrophil cytoplasmic antibody, anti-double-stranded DNA antibody, anti-Sm antibody, anti-phospholipid antibody including lupus anticoagulant, anti-cardiolipin IgG and IgM, and anti-beta2 glycoprotein I IgG and IgM, and venereal disease research laboratory (VDRL) test were all negative. Serum immunofixation electrophoresis revealed monoclonal gammopathy (IgM and kappa type), and there was no evidence of clonal plasma cell infiltration on the bone marrow examination. And the positron emission tomography (PET) scan was normal. The nerve conduction velocity test revealed sensory-motor polyneuropathy of both feet. The clinical diagnosis was cryoglobulinemic vasculitis with CNS involvement and we additionally administrated intravenous cyclophosphamide 750 mg. She has been followed in the outpatient clinic without a flare-up for four months. 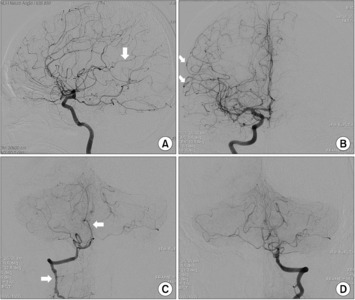 Figure 2. Lateral view (A) and anterior-posterior view (B) of the conventional cerebral angiography shows diffuse stenosis and beaded pattern (white arrows) of the anterior and middle cerebral arteries and their branches. The right distal vertebral artery and basilar artery trunk show diffuse luminal narrowing with dysplastic changes (white arrows) (C) compared to the left side (D).

To the best of our knowledge, this was the first case of overlap syndrome of SSc and cryoglo-bulinemic vasculitis with CNS involvement. Cryoglobulinemic vasculitis and SSc often manifest as skin ulcers and peripheral neuropathy [4,7]. In one study, four out of 246 (1.6%) SSc patients were diagnosed with mixed CV and shared a number of manifestations. All patients had limited cutaneous SSc with serum anticentromere antibodies, complicated by severe and non-healing skin ulcers of the lower limbs, peripheral neuropathy, and pulmonary hypertension, but no one presented with CNS involvement [4].

Cryoglobulinemic disease is diagnosed by the presence of typical organ involvement (mainly skin, kidney, or peripheral nerves) and circulating CGs in most cases [8]. In this case, the patient presented with constitutional symptoms (fever and fatigue), arthralgia, Raynaud’s phenomenon, skin ulcer, peripheral neuropathy, and CNS vasculitis. The laboratory findings supporting the diagnosis were positive cryoglobulin and rheumatoid factor tests, and reduced C4 levels. We presumed it was type 2 cryoglobulinemic vasculitis because the lab results showed low C4 levels, rheumatoid factor activity, and IgM and kappa type monoclonal gammopathy on immunofixation serum electrophoresis [9]. Furthermore, there was no evidence of lymphoproliferative disease in the bone marrow examination and the PET scan in the present case.

The initial CSF analysis showed high protein and low glucose levels, and neutrophilic pleocytosis. These findings suggested the possibility of infectious meningitis. However, there were no isolated bacterial, viral, and fungal pathogen in the CSF analysis. In addition, after administering seven days of empirical antibiotics and five days of antiviral agents, the patient had sustained fever and neurological deterioration. Fever and the neurological deficits were relieved within three days after treatment with a high-dose corticosteroid. In several case series, patients with cryoglobulinemic vasculitis and CNS manifestations had normal [10] or abnormal CSF values including elevated protein concentrations or lymphocytic pleocytosis [11]. However, neutrophilic pleocytosis was also reported in a case of CV with CNS involvement [12].

A brain biopsy was not performed in the present case. However, there were a number of findings supporting the diagnosis of CNS vasculitis, such as pleocytosis in the CSF, typical conventional cerebral angiographic findings including multiple segmental narrowing (beaded-pattern) of the cerebral arteries, and multiple T2 high signal intensity lesions in the bilateral hemispheres on brain MRI [13]. Most of the neurologic deficits and constitutional symptoms were relieved after treatment with high-dose corticosteroid therapy. The main differential diagnosis was reversible posterior leukoencephalopathy syndrome (PRES). The clinical symptoms of PRES include encephalopathy (50%∼80%), headache (50%), visual disturbances (33%), and focal neurologic deficits (10%∼15%), and are mainly caused by high blood pressure. Brain imaging usually reveals vasogenic edema, which appears as dark lesions in diffusion-weighted imaging (DWI) in the parieto-occipital regions of both cerebral hemispheres [14]. However, in this case, the brain MRI showed multifocal hyperintense lesions on T2/FLAIR including unilateral cytotoxic edema (high signal on DWI) affecting solely the posterior lobe. In addition, the hypertensive crisis generally precedes neurologic syndrome in PRES [15]. However, the patient in the present case presented with neurologic manifestations prior to BP elevation.

We report a case of overlap syndrome of limited cutaneous SSc and mixed cryoglobulinemic vasculitis with CNS involvement. The symptoms improved promptly after corticosteroid and cyclophosphamide therapy.