Abstract
Objective. Using microRNA (miR) as a biomarker has been a new way for diagnosing many diseases. Although many studies on miR-biomarker have been published, researches on miR-biomarker in ankylosing spondylitis (AS) are limited. Therefore, the objective of this study was to valiate a candidate serum miR as a novel disease-specific novel miR for AS. Methods. Total RNAs were extracted from sera samples of patients with AS (n=57), patients with rheumatoid arthritis (RA) (n=37), or healthy controls (HC) (n=19). Through serum miR screening by microarray, differential levels of miR were subsequently validated by real time PCR. At the time of serum sampling, clinical values such as sex, age, disease duration, AS-disease activity score, uveitis, peripheral arthritis, enthesitis, human leukocyte antigen-B27 presence, and recent medication were evaluated. Results. We found that the expression level of serum miR-3620-3p in AS was notably lower than that in RA or HC. The receiver–operator characteristics curve for determining the diagnostic accuracy showed an area under the curve of 0.919 (p<0.001) with a sensitivity of 87.1% and a specificity of 86.0%. Correlation studies showed that the expression level of miR-3620-3p was only associated with the development of uveitis (p<0.05). Conclusion. Serum miR-3620-3p can be as a new biomarker for diagnosing AS.
Keywords: Spondylitis, ankylosing, Circulating microRNA, Biomarker

Ankylosing spondylitis (AS) is a rheumatic disease characterized by peripheral arthritis, enthesitis, and uveitis. It involves a chronic inflammatory process that can result in ossification of the involved axial skeleton, leading to decreased quality of life [1]. Therefore, a prompt diagnosis is mandatory for an early treatment to ameliorate its prognosis [2]. However, there is still a long delay in the diagnosis of AS [3]. Therefore, specific biomarkers for early diagnosis of AS are urgently needed.

MicroRNAs (miRs) as noncoding RNA oligonucleotides have emerged as potent regulators of the target gene expression in physiologic and pathologic conditions [4]. According to the miRBase database (http://www.mirbase.org/), more than 2,600 human miRs in tissues and systemic circulation have been discovered. It has been reported that miRs can be detected in different biological sources, including serum, saliva, and urine samples. Of note, the reproducibility and the feasibility of measuring miRs make them powerful candidates as disease biomarkers for detecting cancers and heart diseases [5]. In the same line, the expression profile of circulating miRs can be used to detect systemic lupus erythematosus [6] and rheumatoid arthritis (RA) [7].

Although several studies on miRs have been published with a focus on AS pathogenesis [8-10], little data are available regarding serum miRs as a biomarker in AS. Therefore, we have attempted to research for AS specific-biomarkers utilizing serum-miR microarray technology [11]. The aim of the present study was to validate a candidate miR as a disease specific-serum biomarker for AS.

Sera from both three healthy controls (HCs) and three patients with AS were screened by our group using serum miR microarray assay [11].

In the present study, sera from 31 HCs, and 57 AS patients, who met the modified New York criteria [12], and 19 RA patients, who met the 2010 American College of Rheumatology (ACR)-European League Against Rheumatism (EULAR) classification criteria [13], were used to validate the candidate miRs. RNAs were extracted from sera samples using an miRNeasy Serum/Plasma Kit (Qiagen Inc., Valencia, CA, USA). Expression levels of the miR were then analyzed by real-time PCR using a miScript-Reverse Transcription Kit and a miRNA-PCR Kit (Qiagen, Hilden, Germany) with predesigned primers (Qiagen). For serum miRs, there are no established normalizers. Thus, a synthetic spike-in cel-miR-39-3p was added during RNA extraction for technical normalization of quantitative PCR (qPCR). Cycle threshold values were converted to copy numbers by making a standard curve using the synthetic spike-in standard.

Clinical parameters of the enrolled patients are shown in Table 1. There was no significant difference in sex or age between AS and HC groups. The thirty-four percent of patient with AS had uveitis. Patients with a high disease activity were enrolled in this study. After validation analysis of microarray data, the serum levels of miR-3620-3p in patients with AS (243.5±199.6) were found to be significantly lower than those in HC (1,433.0±1,276.0) or RA (968.5±502.4) in this study (Figure 1). To investigate the relevance of the miR as a diagnostic biomarker for discriminating AS patients from HCs, receiver–operator characteristics (ROC) curve analysis was carried out. ROC curves of miR-3620-3p for determining its diagnostic accuracy showed an area under the curve of 0.919 (p<0.001) with a sensitivity of 87.1% and a specificity of 86.0% at a cut-off value of 388.4 (Figure 2). 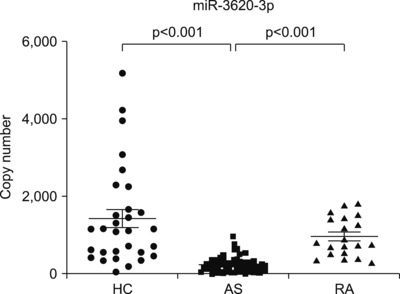 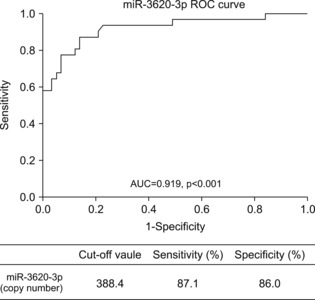 Figure 2. Analyses of the diagnostic potential for discerning ankylosing spondylitis (AS). ROC curve analysis of microRNA (miR)-3620-3p signature was performed to assess its potential as a diagnostic biomarkers for AS. A cut-off value with higher specificity and sensitivity was selected. ROC curve analysis of miR was carried out to assess the potential as diagnostic biomarkers. AUC: area under the curve, ROC: receiver operator characteristic.

To explore the clinical usefulness of miR-3620-3p, further analysis was performed regarding each clinical parameter. Patients with history of uveitis had significant higher levels of miR-3620-3p than patients without history of uveitis (308.5±266.3 vs. 202.7±131.8, p<0.05). We also considered effects of sex, history of peripheral arthritis, history of enthesitis, HLA-B27 status, and TNF blocker on levels of miR-3620-3p. However, none of these confounders had an influence on the level of miR- 3620-3p (Figure 3). The use of steroid medication had a higher proportion in RA patients than in AS patients. However, steroid medication has no significant effect on the level of miR-3620-3p. 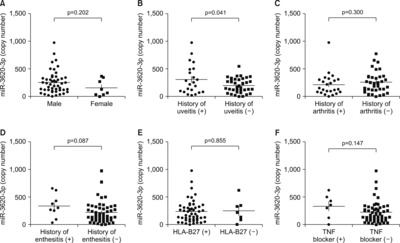 Figure 3. Analysis of the relationship of microRNA (miR)‐3620-3p with sex (A), the disease‐specific variables (B∼E) and use of tumor necrosis factor (TNF) blocker (F). Patients with a history of uveitis had significant higher levels of miR-3620-3p than those without a history of uveitis. Clinical comparisons were carried out using Wilcoxon’s rank sum tests for continuous measures that showed non-normally distribution. Student t-tests were performed for normally distributed values. HLA: human leukocyte antigen. 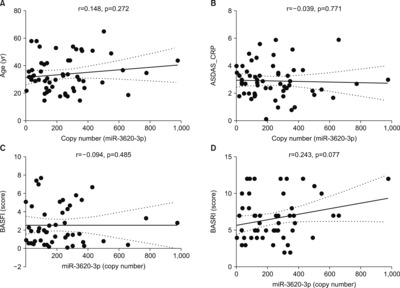 A biomarker is an objective indicator for the medical state of a patient, which can be measured accurately and reproducibly [15]. Circulating miR has been shown to be very stable. Since it is accessible from body sampling, it is useful as a biomarker [16].

Current evidence with regard to the involvement of miRs in AS has been summarized in a systemic review [17]. There is a notable difference in the rs2910164 of miR‐146a single nucleotide polymorphism. Expression levels of miR‐221 and let‐7i were higher in T cells of AS. Let‐7i plays an important role in controlling the T cell survival. Another study has suggested that miR‐124 might induce autophagy to participate in AS T cells by targeting anthrax toxin receptor 2. The expression level of miR‐29a in peripheral blood mononuclear cells in AS can serve as a diagnostic marker in new bone formation. However, these results were obtained from gene polymorphisms and blood cells, not from sera. Recently, studies on circulating miRs in AS have been published, identifying miR‐146a, and miR‐155, miR‐34a, miR‐10b, miR‐30a, miR‐32, miR‐16, miR‐150, and miR‐154 as new biomarkers. In another study, miRs from plasma samples of patients with a progressive spinal disease have been evaluated. MiR-625-3p levels have been found to be significantly different between patients with non-radiographic axial spondyloarthritis and HCs. Another study including 800 miRs has shown altered expression levels of the plasma miRs (miR-151a-3p, miR-22-3p, miR-150- 5p, miR-146a-5p, miR-125a-5p, and miR-451a) in AS patients [18]. However, these data were not analyzed by comparing disease‐control groups. In our study, expression levels of serum miR-3620-3p in AS patients were consistently lower than those in disease controls or HCs. Moreover, expression levels of miR-3620-3p were not influenced by sex, age, disease duration, or current medications. miR-3620-3p with a proper cut-off value showed very high sensitivity and specificity. Results of this study indicate that the serum miR-3620-3p can serve as a novel biomarker for diagnosing AS.

Although uveitis is the most frequent extra-musculoskeletal symptom in AS, its pathogenesis has not been fully elucidated yet. Moreover, there has been no conclusive biomarker to predict the development of uveitis in AS. According to a review paper, the miRs that show the highest potential for noticing the development in uveitis are miR-205, miR-223-3p, let-7e, miR-155, miR-182 and miR-182- 5p, miRNA-1, miR-9-3, miR-20a-5p, miR-23a, mir-29a-3p, miR-146a-5p, miR-196a2, miR-140-5p, miR-143, miR-146a, and miR-301a [19]. In the present study, miR-3620-3p was highly associated with history of uveitis. This result can give additional information on a biomarker for uveitis. However, we do not know whether this miR-3620-3p could cause uveitis directly. Further experiments are needed to obtain direct evidence of using miR-3620-3p for predicting the development of uveitis.

This study has some limitations. Because of the small sample size and heterogeneity of AS in this study, data of this study should be confirmed again by further validation studies. It has been reported that miR-3620-3p can significantly promote gastric cancer cell apoptosis [20]. In other study, miR-3620-3p was upregulated in the upper tract of urothelial carcinoma [21]. There has been no clue on how the expression level of this miR is decreased in AS, compared to that in control groups. Therefore, mechanisms underlying the aberrant expression of miR-3620-3p involved in AS remain to be examined.

In conclusion, miR-3620-3p can serve as a novel biomarker for diagnosing AS. Additionally, the expression level of miR-3620-3p was associated with a history of uveitis.