Abstract
Objective: This study aims to evaluate the change in serum metalloproteinase-3 (MMP-3) following the management of active rheumatoid arthritis (RA) and define the relationships between MMP-3 and disease activity indices.
Methods: Data from a previously reported a 24-week, randomized controlled trial to investigate efficacy of tocilizumab in active RA refractory to methotrexate were analyzed. The serum level of MMP-3 were measured at week 0, 12, 20, and 24. The changes in MMP-3, and the relationship between MMP-3 and clinical parameters was assessed based on treatment group, methotrexate with or without tocilizumab.
Results: A total of 95 patients were included in this study. The serum MMP-3 significantly decreased and showed similar pattern with other disease activity indices during treatment period in both treatment groups (p<0.001). The MMP-3 was positively correlated with ESR, CRP, DAS28, SDAI, and CDAI for 302 visits throughout 24 weeks (p<0.001). In another correlation analysis to evaluate the treatment effect at 24 week time point, methotrexate group showed significant correlation between serum markers: MMP-3 (r=0.321, p=0.043); ESR (r=0.450, p=0.002); and CRP (r=0.536, p<0.001), with DAS28, but tocilizumab group didn’t show meaningful correlation between serum markers and DAS28 (p>0.05).
Conclusion: Serum MMP-3 showed positive correlation with disease activity indices in active RA patients. Furthermore, serum MMP-3 significantly decreased from baseline to week 20. As there is no single serum marker that can represent the disease activity particularly in tocilizumab treatment, MMP-3 might be a useful adjunct indicator to evaluate the treatment response in active RA patients.
Keywords: Matrix metalloproteinase 3, Rheumatoid arthritis, Biomarker, Methotrexate, Tocilizumab

Rheumatoid arthritis (RA) is a prolonged immune-mediated disease characterized by erosive polyarthritis and joint destruction with systemic complications [1]. It affects a wide range of physical function, well-being, and productivity, in addition to increased demand for health care resources. A strategic approach is required for better outcome in case of high disease activity [2]. Recently, the introduction of disease-modifying antirheumatic drugs (DMARDs) has led to an evolution of therapeutic algorithms and strategies for RA, dramatically improving patient outcomes [3]. Developing better outcome measures is one of the major issues in the treatment of RA [4]. Remission, defined by composite indices such as 28-joint Disease Activity Score (DAS28) and Simplified Disease Activity Index (SDAI), is the therapeutic goal for patients with RA, and it is also regarded as a primary or secondary endpoint for clinical trials [5]. However, most of these measures, including patient or physician global assessment, use swollen or tender joint count, a subjective approach to disease activity. As observer (rheumatologists) variation is not neglected, standardization of these measures is demanding to perform in daily clinical practice.

The determination of serum markers may be one of the objective approaches for estimating disease activity. Erythrocyte sedimentation rate (ESR) and C-reactive protein (CRP) are the most frequently used for assessing disease activity in RA patients. However, those are markers of non-specific inflammation, not specific inflammation in rheumatoid synovium [6]. Unlike other biologic agents, tocilizumab has the mechanism of action that involves inhibition of interleukin (IL)-6 receptors, resulting in CRP levels decreased to negative values. Therefore, outcome measures that depend on CRP levels may not reflect disease activity under the tocilizumab treatment [7,8].

Matrix metalloproteinase-3 (MMP-3) is produced by synoviocytes and responsible for the degradation of collagen in cartilage, thus having pivotal roles in the destruction of cartilage in patients with RA [9]. With respect to its diagnostic and prognostic potential in RA patients, elevated serum concentrations of MMP-3 have been studied to correlate with disease activity indices [10,11]. However, serial MMP-3 levels and the correlation between MMP-3 and clinical parameters at different time points are rare, and comparing the change of MMP-3 levels in methotrexate with tocilizumab therapy have not yet been established in patients with RA.

This study aims to define the relationship between MMP-3 and several disease activity indices, and to compare the change of MMP-3 levels during 24-week treatment of methotrexate with tocilizumab in active RA patients data from prospective randomized controlled study [12].

The data of this study were collected from previously reported multicenter randomized clinical trial to investigate the efficacy and safety of tocilizumab in Korean patients with active RA failed to respond to methotrexate with or without other conventional DMARDs [12]. From October 2009 to October 2010, patients with RA who fulfilled the 1987 American College of Rheumatology (ACR) criteria were enrolled [13]. Active RA was defined by 6 or more swollen joints based on 66-joint count; 8 or more tender joints based on 68-joint count; serum CRP 1 mg/dL or higher; or ESR 28 mm/hr or higher. Stable dose of conventional DMARDs was required within 8 weeks prior to the baseline. Concurrent oral glucocorticoids (≤10 mg/day prednisone or equivalents) and non-steroidal anti-inflammatory drugs were allowed. Key exclusion criteria included concurrent active infection or malignancy, or previous hypersensitivity or contraindication to treatment with tocilizumab.

The main study of previous trial was a 24-week, phase III, randomized double-blind, placebo-controlled study. A total of 99 patients were randomized in a 1:1 ratio to receive either placebo (n=51) or tocilizumab (n=48) stratified according to methotrexate alone or in combination with other conventional DMARDs. During the trial, four patients were excluded from the main study due to Good Clinical Practice (GCP) or protocol violations: 3 from the placebo group and 1 from the tocilizumab group. In this study, we newly defined these two groups as methotrexate group (methotrexate therapy; n=48) and tocilizumab group (methotrexate with tocilizumab therapy; n=47). Concurrent conventional DMARDs was continued during the study. The detailed protocol of main study was provided in Supplementary Data. The study was approved by the Institutional Review Board of Seoul National University Hospital (IRB #1302-028-463 and #1701-018-820) and written informed was obtained from each patients. This study was conducted in accordance with the principles of the Declaration of Helsinki and GCP guidelines.

Baseline characteristics of the participants

Data from 95 Korean patients with active RA were analyzed. The patient baseline demographics and clinical characteristics are described in Table 1. In brief, the mean±SD age of the patients was 52.3±11.3 and 88.4% were female. The serum level of MMP-3 at baseline was 290.0±206.4 ng/mL. All patients showed moderate or high disease activity; their mean DAS28-ESR, DAS28-CRP, SDAI, and CDAI were 6.9±0.9, 6.2±1.0, 45.3±14.7, and 42.4±13.6, respectively. There was no statistically difference between methotrexate group and tocilizumab group in baseline disease activity indices including serum markers (ESR and CRP), DAS28-ESR, DAS28-CRP, SDAI, and CDAI (all p>0.05). Patients receiving methotrexate alone were 56.8%, methotrexate with hydroxychloroquine were 33.7%, and methotrexate with sulfasalazine were 9.5% at baseline. 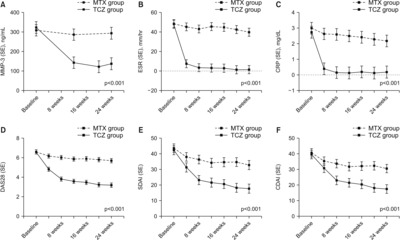 Correlations between MMP-3 and other biomarkers 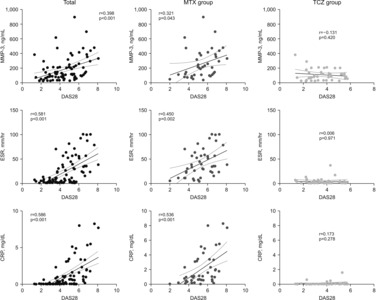 This study was performed to evaluate the serial relationships between MMP-3 and several disease activity indices using the data and serum samples obtained in the previous randomized controlled trial in active RA patients treated with methotrexate with or without tocilizumab for 24 weeks [12]. We found that the MMP-3 levels robustly decreased from baseline to 12 weeks, and this decrement continued into week 20 during 24-week treatment period. Furthermore, the MMP-3 was positively correlated with ESR, CRP, DAS28, SDAI, and CDAI for 302 visits throughout 24 weeks.

The evaluation of disease activity by symptoms and sign is important in RA patients; in this regard, composite scores of indices such as DAS28, SDAI, or CDAI have been developed. However, these indices are subjective and require training for the assessors to reduce variability. In fact, standardization of these measures is demanding in clinical practice. Therefore, serum markers in RA are valuable for decision-making as adjunctive measures in clinical situations.

In this study, all enrolled patients were moderate or high disease activity by DAS28, and had elevated MMP-3 levels (290.0 ng/mL) at baseline, consistent with the previous studies [14,15]. Zhou et al. [16] reported serum MMP-3 levels in each group of patients with active RA: 54.25 ng/mL in mild RA, 105.10 ng/mL in moderate RA, and 363.11 ng/mL in severe RA. We also found that the serum MMP-3 levels significantly decreased following the treatment, especially with tocilizumab (122.2 ng/mL at 20 weeks).

Given the tocilizumab acts by different mechanism from other DMARDs, there are some reports that levels of serum markers such as ESR and CRP remain negative values during tocilizumab treatment [14,17]. Tocilizumab is a monoclonal antibodies acting as IL-6 receptor blocker and fully inhibits the production of acute-phase reactants in particular CRP [18]. Therefore, negative values of CRP frequently observed even in some patients do not achieve to remission or lower disease activity under tocilizumab treatment. We demonstrated similar results that ESR and CRP levels in tocilizumab group showed negative values during 24 weeks follow up (Figure 1). Furthermore, our analysis of the correlation between serum markers and DAS28 after 24-week treatment showed that methotrexate group but not tocilizumab group showed significantly positive correlation of serum markers including MMP-3, ESR, and CRP with DAS28 (Figure 2). These results indicate that serum markers are affected by the mechanism of tocilizumab. Although we failed to show the significant correlation between MMP-3 and DAS28 after 24-week tocilizumab treatment, all 8 patients with high disease activity in tocilizumab group showed elevated MMP-3 levels but not ESR and CRP levels (data not shown).

We performed further subgroup analysis to investigate the changes of serum markers based on DAS28 at 24 weeks: non HDA and HDA groups. Interestingly, the levels of MMP-3 and ESR showed significant decrease with treatment during 24 weeks in both two different disease activity groups, while CRP did not show meaningful change in these groups (Figure 3). These results suggest that MMP-3 and ESR rather than CRP might be a good predictors of treatment response in subgroup based on disease activity. In addition, we found that decrement of MMP-3 levels rebounded at 24 weeks. Although we didn’t obtain the information of radiographic damage, it may be attributed to radiographic progression. In fact, we cannot provide the clear relationship of re-elevated MMP-3 levels and radiographic progression. However, several prior studies demonstrated that MMP-3 is potential marker of radiographic damage [15,19,20].

The utility of serum MMP-3 has been studied but little known in longitudinal analysis. Shinozaki et al. reported the relationship of serum MMP-3 and increment in HAQ over 4 years [21]. However, they demonstrated the usefulness of positivity of MMP-3 by qualitative analysis. In other previous studies, longitudinal analysis was done in a small number of patients with RA, or serial MMP-3 levels were not presented [14,16,22]. Compared to these reports, we included 95 patients with active RA from a prospective trial, and performed a quantitative analysis of MMP-3 and an evaluation of the change in MMP-3 levels grouped by methotrexate or tocilizumab treatment for 24 weeks.

This study had several limitations. Firstly, given that we used a cohort of RA patients from a previous randomized controlled trial where tocilizumab was compared with conventional DMARDs in patients with high disease activity, we could not rule out the effects of other biologics, including tumor necrosis factor inhibitor, on MMP-3 levels. Secondly, although previous studies reported serum MMP-3 level as a useful marker for predicting joint damage progression, we could not obtain any information about the radiographic change in our patients. Thirdly, when calculating the disease activity scores, we used 66/68 joint count, which may have overestimated the RA disease activity compared to 28 joint count data. However, our data was based on the prospective controlled trial and could provide the most reliable evidence on the effectiveness of treatment on MMP-3 levels.

In conclusion, this study showed the meaningful relationships between MMP-3 and ESR, CRP, DAS28, SDAI, and CDAI in RA patients. Furthermore, the MMP-3 levels largely and significantly decreased from baseline to 20 weeks over the 24-week treatment period.

There is no single serum marker to represent the disease activity particularly in tocilizumab treatment. Thus, our results suggest that MMP-3 might be a useful adjunct indicator to evaluate the treatment response in active RA patients.

We would like to thank JW Bioscience Co. Ltd and SEKISUI MEDICAL CO., LTD for technical help.